Samuel is a Brighton based electronic pop artist. He creates melodic, atmospheric pop with lyrics that come straight from the heart. An entertainer who puts everything into his performance, I first saw him at one of my regular EMOM nights at The Troubadour in London. In this interview, I particularly wanted to find out more about his song writing approach and his views on the current music scene.

Before we get started Samuel, tell me a little bit about your background?

I grew up in Italy, just outside of Rome, and moved to Surrey in the UK when I was around three or four years old. I always enjoyed the escapism of drama and used to make plays with my friends at school. At secondary school I was in all the school productions and I went on to study Media and Film at College and University.

Were you making music then as well, or did that come later?

I never studied music formally. I began self-teaching myself in 2015. I learnt everything from scratch. Ha, I even remember having to Google what a “chord” was. Since then I’ve taught myself music production, song writing and how to play piano. I wrote a song (or two) every day for about a year and a half before I started hiring engineers who could take my work and then mix and master the final product.

So how does your music take shape?

Most of the time I sit at the keyboard with an idea or a song concept and start playing chords until a melody or lyric comes to my head. From there it’s usually a quick process where a song takes me about 15 minutes to get down.

Once you’ve done that how do you record the music?

I do my production in Logic X. I have two midi keyboards, one is an M-Audio and the other a Korg. I record vocals on a Rhode NT1A and layer it all up. I’ll often send a track to an engineer to mix and master and sometimes to alter some production. It’s good to get that second opinion on what you’re doing. 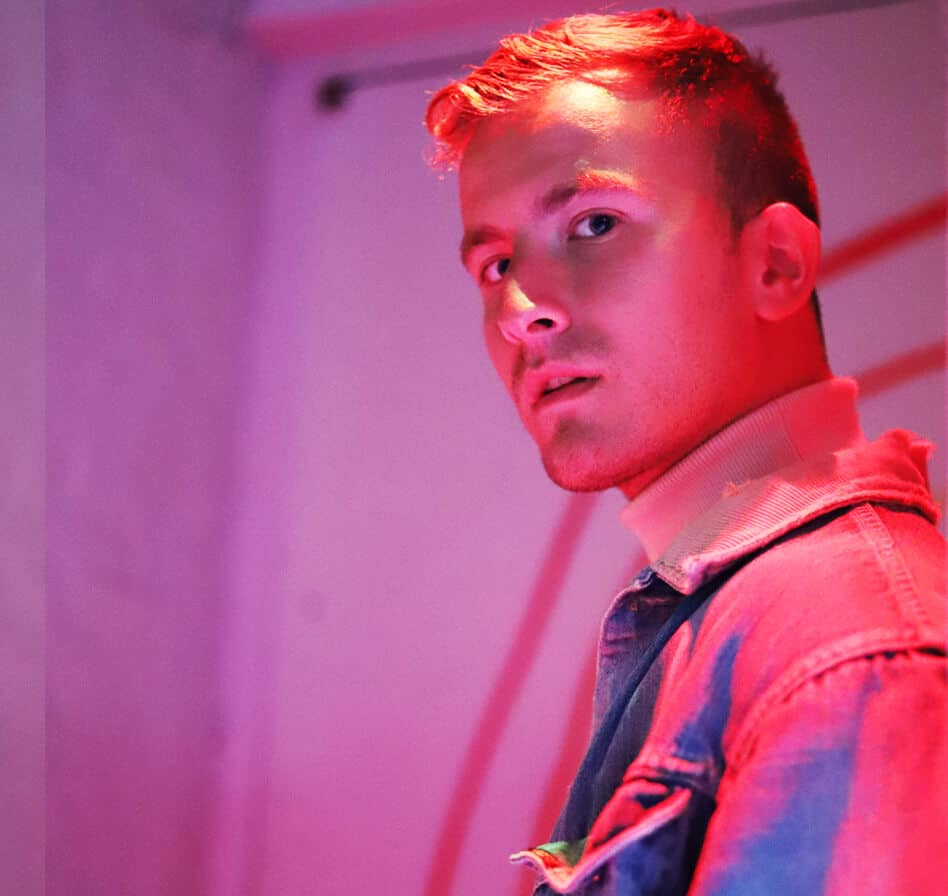 Who would you say are your influences Samuel? And what music inspires you?

I grew up listening to the music of the 80s, thanks to my Mum. She would put on her VHS tapes of bands like Duran Duran and Billy Idol and I would sit and watch them with her. I loved the synths, the flamboyance that these acts had, it was inspiring. I adore The Pet Shop Boys, Adam and The Ants, Robyn, Lana Del Rey and Lil Peep. I think I knew all the words to Prince Charming before I knew my 8 times table. I later went on to get my one and only tattoo in Nashville and it was the lyrics from that song – ‘Ridicule is nothing to be scared of!’

So is the performance side of an act important do you think?

Absolutely. I’m not just a songwriter, singer or producer – I’m an entertainer. My job is to entertain. Every time I get on a stage to perform I’m thinking about how I want to present my songs to the audience, what mood I want to convey and what character I want to show on stage. My idols are people like Madonna who know how to package and brand themselves through artistic and sometimes provocative performances. Or Kate Bush who would use beautiful dance and avant-garde outfits to add another layer to the songs she was singing.

So what do you think of the music industry at this time?

I feel like branding is more important than ever now, that can be a good and a bad thing. Streaming has demolished iTunes and there’s big money to be made playing live. I get overwhelmed when I think about “the music industry” because I feel so far from being involved in it, but at the same time I’m releasing music so I guess I am actually a part of it but on a small scale.

Tell me what you’ve got planned for the future?

I will be performing at Synthetic City Live and I’m really excited to get back to London and perform my music. After that I will be in Brighton performing at The Brunswick. I’m so looking forward to those venues because they carry a lot of clout and prestige. I write music to perform so to be able to bring my songs to life at such wonderful venues is a real honour.

I’m also focusing on shooting some music videos for my EP “Samuel”. I’m so happy with the response I have had from it so I have chosen the tracks that the people listening like the most to do videos for. I have started writing for my next EP, but I’m taking my time to get it just right.

Thanks for talking to AnalogueTrash Samuel and I look forward to seeing those videos. You can check out Samuel’s music on Spotify, iTunes and Soundcloud.

By using our website, you confirm that you're cool with us using cookies to improve the user experience and to track numbers of visitors. For more information, click here. Ok