Martin Christie’s Music Travels: The Near and Distant Future of Live Music

The basic human need for live music is driving a range of innovations for future gigs in the context of this painful pandemic. These events look very different to what we have become used to, but these approaches, and variations on these approaches, may be the only way forward for the time being. In this article Martin Christie brings together some of these innovations and discusses the future of live music. 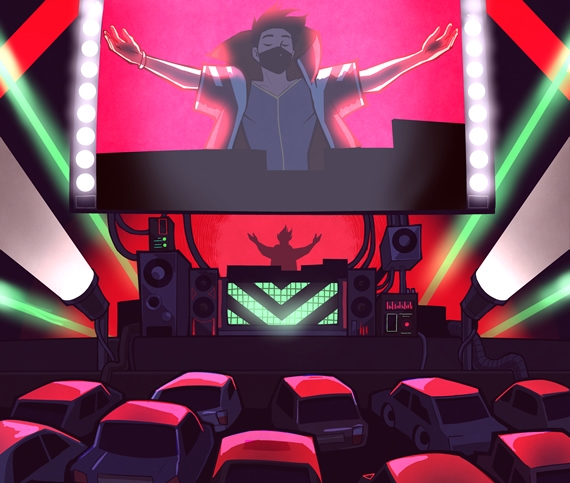 There hasn’t been much talk of live music amongst the attention-grabbing coronavirus headlines. But what we all know at this time is that the virus hasn’t gone away. And if we are to believe what the scientists are saying about a second wave later in the year, this will mean more trouble for our already hard-hit live music scene, as well as venues.

I bumped into the owner of one such venue recently. The venue has a capacity of around 650 and the owner told me he didn’t plan to reopen until next year, even with the revised one metre plus rules. He said he couldn’t make it work given factors like floor space, numbers of staff, the layout of the building, the introduction of seating, cleaning regimes and additional work to bring the toilets up to scratch. He had a point, particularly about the toilets, the venue had prided itself for having the grubbiest toilets in town for many years.

I don’t expect this Government to make much of an effort for live music. Most of the recent (restrictive) guidance seems to be based on a theory that musicians, performers and audience members will spread the virus through aerosol transmission. There’s a logic there but like any other areas of human activity there must be steps that could be taken to reduce the risk. If it can be done for flights abroad it can be done for live music. In fact, it’s already happening and there are some good examples of what live music could look like in the near and distant future.

At the drive-in
Drive in concerts have been taking place during lock-down across Europe. These have ranged from techno festivals in the car park of a night club in Berlin, to a singer song writer concert in Denmark. Whatever the music style the principle is the same. Car owners are allocated a space in the car park facing the stage and audio is transmitted into the cars via FM radio.

A maximum of two people per car seems to be the accepted limit so a car park that holds 250 cars can easily accommodate a crowd of 500 people. Naturally it’s not the same vibe as being in and amongst a mass of other people who share your love of a particular piece of music, but it’s still an approach that looks like it will be with us for some time to come. 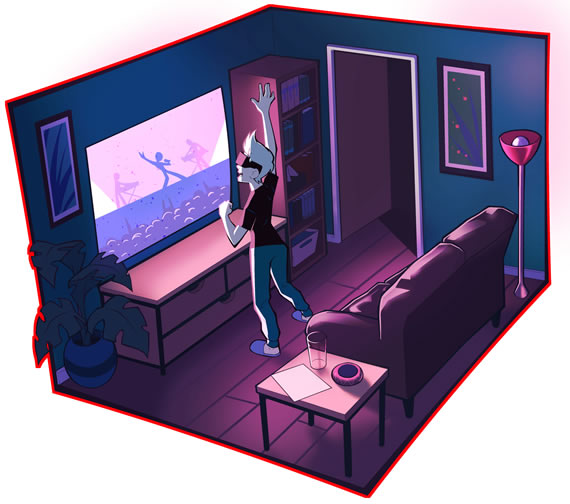 Virtual concerts
The virtual concert has been around for a while now with different artists like Gorillaz and The Glitch Mob experimenting with various approaches. But the pandemic has fuelled increased interest in this area of online activity with tie-ins between the music industry and game developers. A successful example of this was the recent Travis Scott and Fortnite online event which saw a digital avatar of the rapper performing in game play environments for a ten minute concert. Imagine playing a normal game of Fortnite and a giant shirtless man appears and starts rapping. It caught everyones attention and an estimated 27 million gamers watched the show!

These kinds of events require a team of developers and extensive resources to carry off. And given the eye watering number of participants no doubt the music industry will be exploring ways of capitalising further on this meeting place between games and music performance.

However, it does seem likely that as the technology develops it will become possible for smaller scale virtual concerts to take place. Performers would use virtual reality headsets, gloves and suits to control a range of virtual instruments, and the audience would participate in the show in a similar way. With everything taking place in a virtual concert hall or shabby backstreet venue depending on the players’ choice.

On-line broadcasts
The use of social media such as Facebook, Twitch, YouTube and even Zoom to broadcast live performances has surged since the start of the lock down. I’ve watched many of these broadcasts including the Virtual EMOM (pictured above with Judged by Music) as discussed in my last article for Analogue Trash. They range from simple broadcasts involving one artist playing music from home, to more interactive arrangements with multiple performers on a virtual bill.

Personally if I’m not actively involved in these types of events (such as helping to host the Virtual EMOM) I struggle to stay engaged for very long. I find I’m easily distracted by other things on the screen and about the house. I suspect I’m not the only one. But the online broadcasts plug a gap and are an important part of the rapidly changing live music landscape. 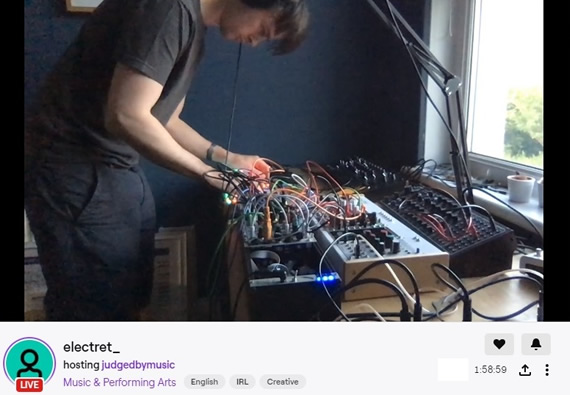 The socially distanced gig
Although the Government rules in this country do not yet allow live music to take place there are examples from around the world of what low risk socially distanced gigs could look like. In South Korea for example some concerts have continued throughout lock down, audience members walk through a light mist of disinfectant, wear face masks, have their temperature taken on entrance and remain socially distanced during the concert.

I’m not sure I’d like the light mist of disinfectant (read this NME article to find out more) but it goes to show that there are methods available for the continuation of live music and performance. Musicians and music fans could attend concerts that are as low risk as any other area of human activity such as flying or watching sports.
A combination of measures are brought together to manage the risk of cross contamination. It’s true that this is probably an expensive option and one that would impact on ticket and drinks prices but hell, many of us here are gagging for a good night out and looking to party before the virus gets us.

A return to the ‘normal’ gig?
All of the methods I’ve described above are happening now. They are the present and near future of live music. Being an optimistic kind of person, I like to think the future will also involve a return to live gigs as we knew them pre Covid-19. A return to the fit as many as people as you can into a buzzing venue for a good time listening, dancing, chatting, and socialising to music.

No need for social distancing of any kind because the virus is finished, or being managed better, or simply accepted as a risk to human life. I’m hoping and making plans for just such a return in 2021, which feels like a long way away at this time. But at least for now we have all these other options to explore and as necessity is the mother of invention who knows what other solutions we may find.

Recommended reading and action: The Concert Promoters Association Campaign Let the music play, a campaign to highlight the importance of the live music sector to the UK’s economy and cultural health.