In response to the countrywide lock-down, the Electronic Music Open Mic (EMOM) community, like many other groups, has quickly come up with various online streaming events. These events have included the Virtual EMOM organised by Quentin Leonetti, an experimental musician from Belgium (pictured above).

The second one of these events took place recently, having gained a lot of technical knowledge from the first event a month previously. This is a review of VEMOM #2. In the pre-pandemic days, when we could gather in groups and listen to live electronic music, we most likely didn’t realise what a wonderful opportunity that was. We naturally took it for granted because that’s how things had always been. No need for social distancing or face masks and rubber gloves (unless you were attending a different type of night to the ones I went to).

But the only weapon we have against this virus at this time is social distancing, so it’s very unlikely that music gatherings as we all knew and loved them are coming back any time soon. Live streaming and consuming our music on laptops and other devices is here to stay.

The EMOM events were always based on a quick turn round of acts with plenty going on to keep the interest levels flowing. They offered underground and eclectic creatives an opportunity to showcase their work alongside like-minded people. The live environment also provided a place in which people could meet other artists and share ideas. Many collaborations, music releases, and more substantial gigs followed on as a result.

It’s impossible to emulate the feeling of being in a live environment through live streaming. But the Virtual EMOM event put together by Quentin Leonetti offers a good substitute in these difficult times. Quentin uses Twitch, the live video streaming service which is primarily aimed at video gamers, to enable other artists to perform autonomously through the course of the event.

A major advantage of Twitch is that the sound quality is so much better than many other online broadcast approaches (e.g., Zoom, Facebook, Skype. Etc.). For those registered with Twitch, which is a very straightforward process, there is also the opportunity to chat with other viewers and the performers themselves in an online setting.

Quentin also includes tracks and videos that have been submitted to the show for between acts consumption. This has the added value of allowing time to sort out any technical problems he may be facing at the sharp end of hosting the event. Technical issues are a frequent occurrence at ‘normal’ EMOM events, let alone online ones.

During the pilot edition of VEMOM, one of the performers was happily running through his set, oblivious to the fact that none of us watching could hear anything he was playing. He still had his microphone on, though, so it meant we could hear his partner whispering ‘turn it up, turn it up,’ which was no doubt a rare request in normal circumstances.

There were six live sets in total at VEMOM #2, and these were from CHAOS LOL, Loopingstar, Autorotation, Three Recurring, Frugal and Rippletank. CHAOS LOL from Manchester (pictured above) describes his sound as high-hype polyrhythmic footwork, techno, and gabba. He used the VJ software Resolume to layer his performance with some nice glitchy psychedelic effects. 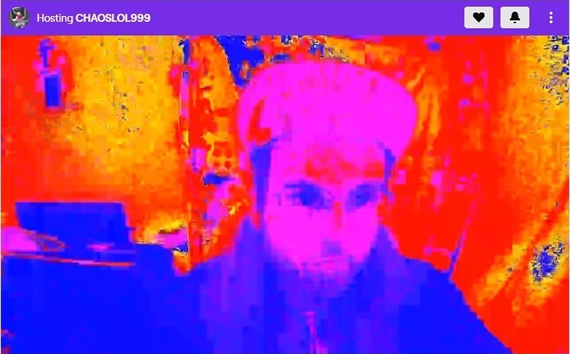 Loopingstar played an electronic set using Korg Gadget and Garage Band for the iPad, and also an Elektron Model:Cycles Groovebox. Loopingstar also set up his play space nicely with a DJ style table for his tech, a big-screen television for the visuals and disco lights.

Autorotation (pictured below) is an industrial art-pop group from London. They played two lovely synth-based tracks called Looster and Dragonfly. Three Recurring brought the humour with synth-based songs, one of which was about group hugs and another about his neighbours’ habits during lock down! 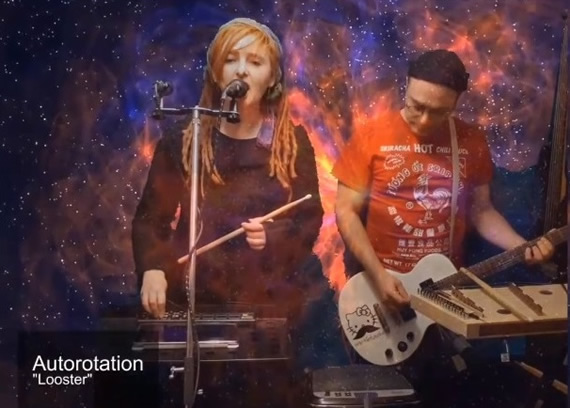 Frugal, who like Three Recurring is a regular performer at the Camberwell EMOM in South London, used a Synthstrom Deluge and a Virus TI Snow for his appearance. The reggae-infused Frontline Squeeze was particularly uplifting and sweet tuneage for what felt like a summers evening (in spring) such was the balmy weather we’d been having.

There were videos from artists such as Brazz Ankh, Eat the Sun and Quentin, himself who produces music as Electret. The Electret film was created by Raul Leiva, a video artist who goes by the name UHS and featured footage of the streets of London on the thirtieth day of the lockdown (see video below). And there were also tracks from a range of artists played out over VJ Loops sourced from Beeple.

The live performances, videos, and tracks all came together to create a really neat show of diverse electronic music. Added to this, it was also good to be involved in discussions with other viewers and the artists involved. Quentin has found an excellent way of hosting the show using Twitch and Open Broadcaster Software (OBS), which also provides pretty good sound quality for an online experience.

To take part in a VEMOM live broadcast, you should contact Quentin Leonetti at q.leonetti@gmail.com.